A Goniometer is a measuring device that helps measure the range of motion at a joint. It is measured in degrees and seems like a protractor with two arms. One arm remains stationary, and the other is movable, which helps determine the degree or range of motion. Using this measuring device helps determine the cause and severity of issues you may have with joint movement. Health Products For You brings you a wide range of goniometric measurement tools from best manufacturers like Fabrication Enterprises, Patterson Medical, North Coast Medical, and more.

What is a Goniomter used for?

There are three parts of a goniometer:

How to take Goniometric Measurements?

There are two arms in a goniometer. One arm has a circle with angle degrees marked on it, and the other arm is movable and helps in taking measurements. You will keep the moving arm on the limb and will see the angle degree that the moving arm is pointing to. 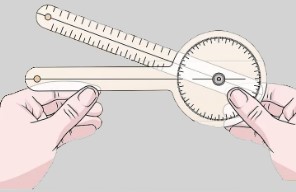 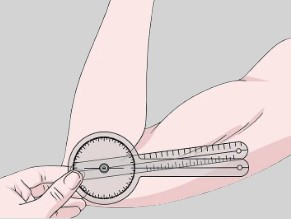 Hold the scale's fulcrum with a stationary arm on the limb. Keep the limb stationary while another limb rotates. This measurement can be taken for different body parts by aligning the arms of the goniometer with the bones in your body. 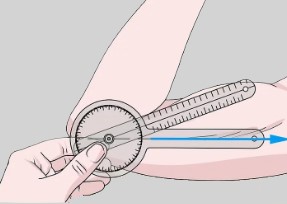 Move the joint forward or backward as possible while holding the goniometer and stationary limb in place. Avoid moving any other part of your body except the limb being measured. Stretch the joint as far as it will go safely, then secure your limb. 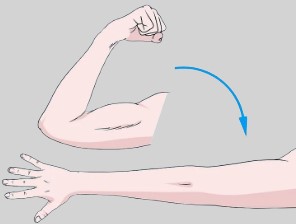 After stretching your limb as far as it can go, place the moving arm in the position where it gets aligned with the stretched limb.
Note:

How to read Goniometer?

What is the normal ROM for a knee?

A fully bent knee will max out at about a full range of motion of 135° degrees of flexion. As a general rule, knee flexion of about 125° will allow you to carry out most normal activities. For daily living, a minimum flexion of around 105°-110° is required.

How do you measure range of motion of all joints?

A joint's ROM is usually measured by the number of degrees from the starting position of a segment to its position at the end of its full range of the movement. The most common way this is done is by using a double-armed goniometer.

Does a goniometer measure flexibility?

It is a device that measures an angle or permits the rotation of an object to a definite position. It is a useful tool for measuring the flexibility of a joint, and is commonly used by physiotherapists, physicians, physical therapists, physiologists, athletic trainers, chiropractors and sport scientists.

Where to buy Goniometers online?

At HPFY, we have a collection of goniometers for all types of uses. We have the standard 360 Degrees Transparent Plastic Goniometer for multiple uses. The Baseline Plastic 180 Degree Digit Finger Goniometer is used to measure more compact joints. For measuring larger joints, try the Exacta Transparent International Goniometer. Baseline Large Joint Arthrodial Protractor Goniometer is a device used to measure the range of motion of the neck joint. Many other specialized goniometers are available for clinical uses. We sell products from featured vendors like Fabrication Enterprises , North Coast Medical , Chattanooga and many more at best prices with attractive discounts on each purchase. Buy now and save big!

Why Shop With Us

We safeguard your information. Protecting Customer privacy is important to us

A one-stop shop for most reputed brands in medical supplies and equipment.

Save more when you schedule and receive your next order automatically

Not every purchase works out, we get it.

Make informed decisions with access to articles and buying guides

Over the past 2 decades, we’ve served more than one million customers

Every purchase earns you Reward Dollars to use on future purchases

Air mattresses or airbeds are the new age sleep comforters that not only give you a comfortable sleep but also help in combating many health problems that are caused or aggravated by the wrong sleeping posture. They improve the quality

Diabetes is on the rise, yet most cases are preventable with healthy lifestyle changes. Taking steps to prevent and control diabetes doesn’t mean living in deprivation; it means eating a balanced diet that will boost your energy. You don’t have

The following degrees of flexion are required for the given activities:

Range of Motion (ROM) is measured by your surgeon or therapist using a device called a Goniometer. You can purchase one yourself online so that you can do the measuring.

A goniometer consists of two hands connected by a joint which is usually attached to a circular piece that is labeled with multiple angular measurements. It is usually made of plastic or wood. As one limb is moved towards or away from the other limb, it is dragged along the circular piece and displays a measurement. Goniometers are available in various sizes depending upon the area of application.

Medical practitioners use goniometers to measure the range of motion found in a patient’s appendage before and after treatment in order to determine if the treatment is actually improving the patient’s condition.